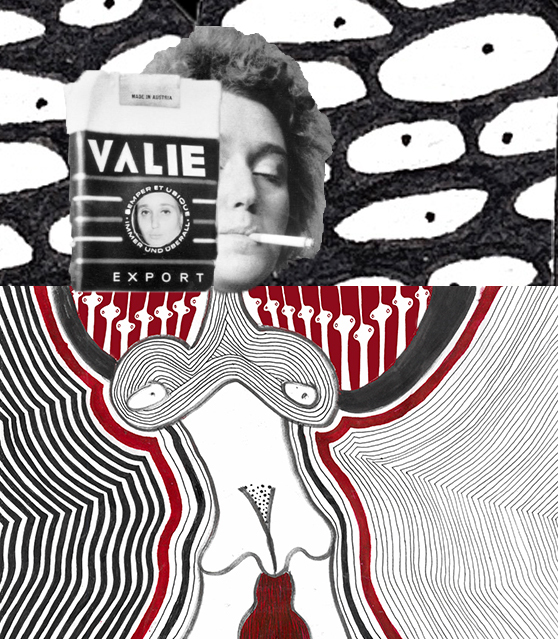 Born Watraud Lehner in 1940, the Austrian performance artist abandoned her predetermined identity by creating her own, on her terms. Her self-determined name served as a manifesto and a logo, written only in capital letters to announce her presence: VALIE EXPORT. Export meaning, “always and everywhere” and to her exporting herself  into anew. Her name was not just a statement of her identity but of being a woman, attached to women being perceived as raw materials within and outside the art world.

Her sense of art was influenced by and was a response to Viennese Actionists: a group of male-dominant performance artists who sought a declaration of the ‘real’ by turning away from post-war art’s dominance of abstraction, in order for Austrians to face the suppressed traumatic memories caused by the Nazis during WWII. Viewing art as a performative action, these artists used violence and destruction as tools for change. Their influence on EXPORT can be observed through her use of self-mutilation and through themes of sex, aggression, and destruction in this post-war period. In her writing The Real and Its Double: The Body, she quotes Heidegger’s thought that “The world is but an image, that the world only exists through the subjects who believe they create the world inasmuch as they produce its representation”. She recognizes and analyzes the burden on a woman’s body through Freudian reasoning. Freud describes a woman as the negative of a man, one who lacks and is absent (tied to lacking a penis), therefore is nonexistent. In order to break free from this portrayal, EXPORT shows the repression with naked revelations throughout her works. She denies embodying difference and rather becomes the master of her identity.

EXPORT standing on all fours moves through a corridor of electric wires with her naked body. Her position represents women being reduced to an animal, and electric wires the limitations and enforced social determinations. She recognizes the burden, analyzes it by enduring the pain and aggression, and at last breaks free with a self-determined identity.

“My exterior shows the interior as I move inward, the inside turned outward, gaping open.”

In this film, EXPORT sits in front of an image of two maltreated children with a pair of nail scissors and a bowl of milk. She starts cutting the cuticles around her fingernails. The action gets more destructive as she cuts deeper and deeper, letting the blood flow into a bowl. This act can be interpreted as a reflection of how the past, the repetitive repression of female history, is buried deep under the skin and is hard to purify. The reshaping act of cuticle  cutting, a ritual of beauty, is far from being cosmetic. The act of trying to fit into the patriarchal image is a destructive psychological investigation of EXPORT’s body.

Through these performances, the artist was illustrating her view of women in the 1960s;  the deprivation of agency and living within the boundaries that the patriarchal society has set. Her work expanded feminist theorists’ definition of patriarchal structure to “a systemic bias against women”. Feminist writer and activist Betty Friedan, reflects on being a woman in this period as “I’m desperate. I begin to feel I have no personality. I’m a server of food and a putter-on of pants and a bedmaker, someday who can be called on when you want something. But who am I?”  This lack of agency informed EXPORT’s description of Feminist Actionism: a movement seeking to “transform the object of male natural history, the material ‘woman’ subjugated and enslaved by the male creator, into an independent actor and creator, object of her own history”.

In understanding EXPORT’s work, it is essential to understand her conception of the body as material. “I, as the center point for the performance, positioned the human body as a sign, as a code for social and artistic expression.” She extends her body into two directions: outside—the body determined by culture, the place where society’s laws are engraved— and inside—the body holding the capacity to externalize inner states. Her body serves as a vehicle for writing her history, restructuring the male-dominated social fabric by implementing women’s ideas into eroticism, sex, and beauty and creating new realities.

This black and white photography series expresses the tension between the individual and the societal forces. EXPORT defines landscape as the arrangement of its elements such as trees, rocks, hills, and the body’s landscape as the arrangement of postures, revelations, or expressions of inner states. The series is based on the avant-garde perception of the body as a performative image. In it, EXPORT arranges her body in bent-over and curled-up positions to reflect the need for self-protection and rejection. She is suggesting that the body portrayed is oftentimes unable to fit the various urban settings, implying the challenge for a woman to adapt to the social and political architecture that shapes society. She alters the original image with the application of red ink, painting the edge of the curbs in red and drawing a red triangle symbol to emphasize the outsider quality of her body. EXPORT is in control of the medium. She is the image-maker.

The history of female experience is a history of scars carved on the body, imposing pain on a woman’s experience of her body. EXPORT’s initial concern and challenge was to develop a women’s body language because the existing one was occupied by male fantasies. To break free from oppression one must not hide the scars caused by the oppressor but instead fully reveal the pain. Her performances endure an unhesitatingly revealing process, wherein historical submissions are expressed as a means of discovering her historical and self-determined identity. It is a duty for the history of the female experience, as well as a critique of the patriarchal structure.

EXPORT chooses to reveal a womanhood scar by tattooing a garter on her thigh, an artwork innately tied to her existence. For her, the garter is a sign of belonging to a class demanding conditioned behavior, evoking the lack of self-determination. It is an object fetishizing women’s underwear and bodies. EXPORT objectifies the body as “a field of inscription by a social code”. By tattooing the garter on her body, she frames herself as a permanent subject symbolizing the objectification and sexualization of women. The art of carving such a symbol on her body also symbolizes how the cycle of predetermination towards femininity cannot be, or is hard to erase from female history.

In this work of body-material interaction, EXPORT rolls over three different materials with her naked body: a piece of broken glass, a glass plate, and a paper screen. This action leaves scars on her body, and her blood traces the paper screen. The piece represents the notion of conquering the body to continue this historical battle of repression.

The patriarchal society structures women’s body vocabulary to satisfy male pleasure. EXPORT rejects this structure by switching the focus from objectifying pain caused by man to pleasure gained by woman herself as the subject.

The short film starts with EXPORT arranging a shower head aimed at her clitoris aiming for the purpose of reaching orgasm. In this act, EXPORT as the singular subject is in full control of her pleasure. Her orgasm is freed from the male expectations of female sexuality, and its structured use as the arousal for the male viewer.

EXPORT condemned the commercialized art world (like the avant-garde artists before her) and presented her work in public spaces. This elevated the shock value of her work and forced the audience to confront her actions in everyday contexts. EXPORT seemingly presents her body as an object, yet set in a public space transforms the perception of an object into a subject through her controlled choices.

In this piece, EXPORT tapes a box with curtains onto her naked breasts. The audience can only view the film by placing their hands inside the curtain. This act transforms the voyeuristic nature of cinema into an “extended cinema”, as the viewer is also viewed by the public surrounding them, making them an object by returning the gaze back to those who initially fixed their gaze at the artist.

This piece is set in a pornographic film theatre occupied by  men who have come to see pornographic images of women. Wearing trousers with a triangle cut out revealing her genitals, EXPORT makes her way through the theater rows holding a gun, and says: “Now you will see in reality what you normally see on screen.” The gun, a male-dominated object, becomes her source of protection of the self-inflicted subjugation. She is stating that the female body is not controlled by male directors, but instead by women themselves in defiance of social rules. By presenting her female anatomy in real time, she challenges the male audience to engage with a “real woman”. The male audience walks out of the theater following this exposure. EXPORT comes to the conclusion that they don’t want to see real beauty but instead specific images constructed by men to satisfy the male gaze.

EXPORT, through her radical artworks, has provided a new vocabulary for the female experience –one that is raw and freed from the expectations of the patriarchal structure; one that desires to prevent the scars of female history to be carried into the future; one that shows women as the subject of their own lives. They are in control. They are the image-maker. 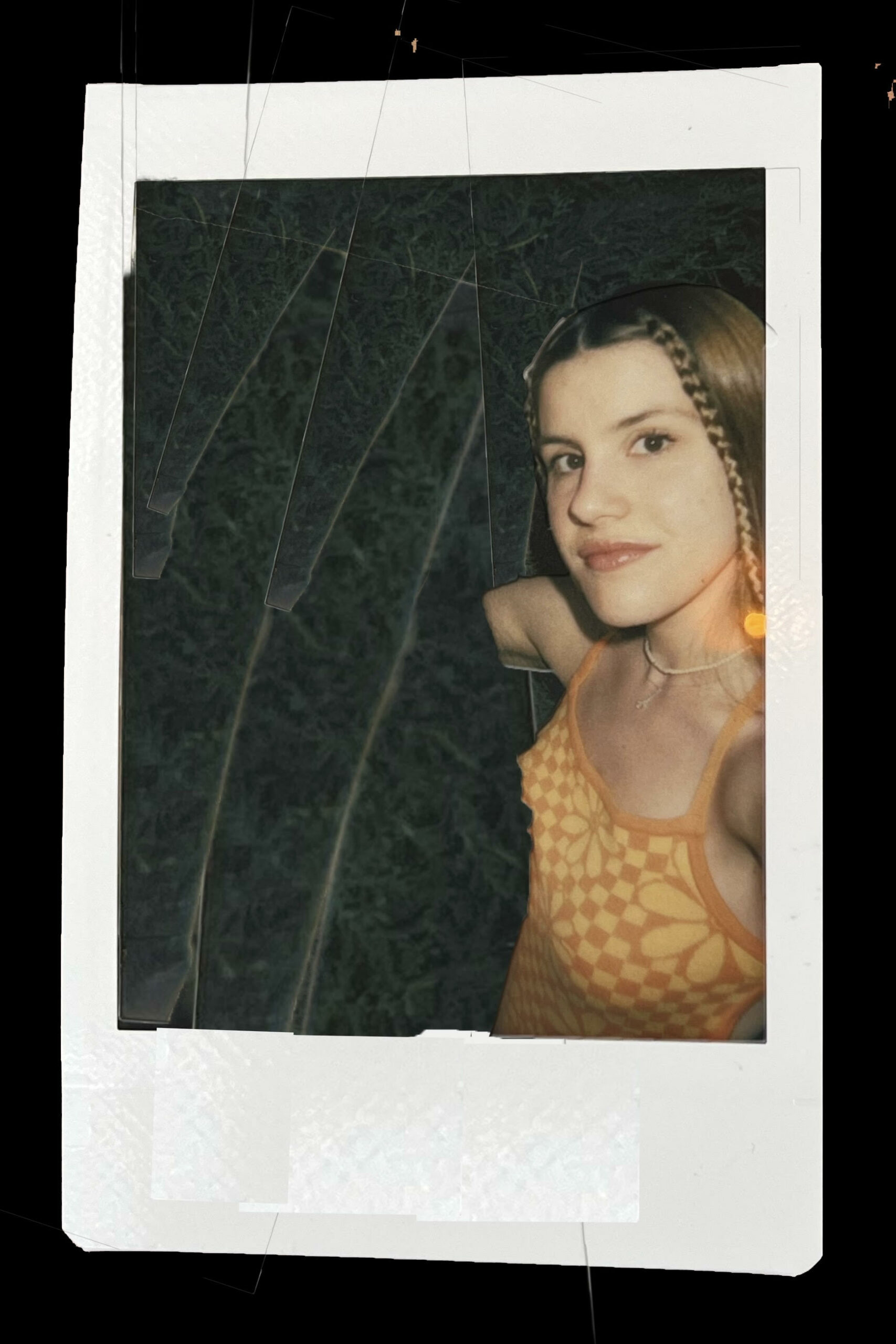